NOTE:  These images not to be copied, duplicated or used without my written consent. Thank you for respecting my wishes.

This is an AP (front to back) x-ray of Hailey around June 2013.  You can obviously see the curve in her spine and the shift in her pelvis. This x-ray determined that an MRI needed to be completed to rule out significant neurological problems in addition to the hemivertebrae seen on film. 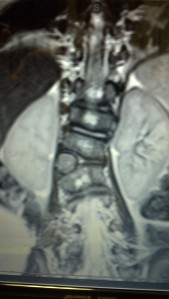 The images to the right are a few of the MRI images from the study done in July.  Thankfully, there were no other neurological problems found in the study.  The hemivertebrae was clearly identified and shows more information as to the significance and how it is affecting her spine.  The circular object seen right where the spine bends into a curve is where the vertebrae did not form when she was developing between 4 and 6 weeks gestation.  That “circle” is supposed to be a square vertebrae that is similar to the rest of the normal, square, vertebrae.  The hemivertebrae accounts for approximately 25 degrees of the approximated 34 degree curve.

NOTE:  These images not to be copied, duplicated or used without my written consent. Thank you for respecting my wishes.

Posted by drmandychiro | Filed under Chiropractic Information, Our Journey